You can have a goat as a pet or herd of goats as livestock. Goats can be considered as pets because they are known to be able to bond with their owner. Meanwhile, farming goat is a promising business; almost every part of goats are useful and profitable for human.

Whether having goats as pets or livestock, you have to take care of their needs. Also, don’t forget to keep them happy and healthy. You may want to treating the diseased goat carefully. The damage from diseased goat doesn’t affect itself and its herd only, but you too. While some of these diseases are not dangerous for us, there are other dangerous goat diseases that might passed to humans. Pay attention to how they transmitted and the symptoms so you can be prepared.

Q fever is a diseased caused by a bacterium called Coxiella burnetii. The word “Q” comes from “Query” that was applied at a time when the causative agent was unknown. It was chosen over other options of abattoir fever and Queensland rickettsial fever to avoid directing negative association at either the cattle industry or the state of Queensland.

This disease transmitted to humans from inhalation of a spore-like small-cell variant, and from contact with the bodily fluid of infected goats such as milk, urine, feces, vaginal mucus, or semen. Most goats have no symptoms, but it may cause abortion to an infected pregnant doe.

The disease in people ranges from asymptomatic to severe. The symptoms in humans are usually flu-like, along with other symptoms, like high fever, headaches, malaise, abdominal pain, chills, muscle pain, chest pain, nausea, vomiting and diarrhea. You might want to be extra careful in treating your infected goats when there is an elder in your family because in some cases, more serious symptoms can occur, especially in elderly patients or in immunosuppressed people. If it left untreated, serious cases of Q fever can lead to chronic illness like hepatitis or endocarditis. However, the mortality falls to around 10% with appropriate treatment. 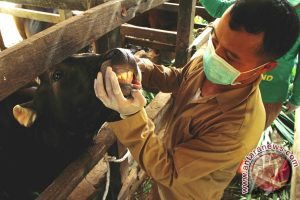 Brucellosis is a bacterial infection that can affect goats and other livestock like cows and sheeps as it causes abortion or stillbirth in animals. You can get infected from direct contact with the placenta and other discharges from doe that is giving birth. Infected goats can spread the Brucella bacteria in milk and in vaginal fluids after abortion or birth. Brucellosis also transmitted from consuming unpasteurized milk and other dairy products, like cheese from infected goats. Thus, it is important to make sure that the milk you are consuming is pasteurized.

Another dangerous goat diseases that might passed to humans listeriosis. It is a rare but serious disease caused by the germ Listeria monocytogenes that usually transmitted by eating or drinking foods contaminated with the germ. While goats milk is undoubtly healthy, unpasteurized milk and other product made from it, also cold cuts are the foods most likely to transmit listeriosis. Infected goats also spread the infection to humans when the infection causes them to abort and the placental remains are heavily contaminated.

Listeriosis’ symptoms vary depending on the infected people. For the high-risk people such as the elderly, unborn babies, newborns and those who are immunocompromised, the symptoms are including fever, muscle aches, headache, stiff neck, confusion, loss of balance, and convulsions.  Listeria is especially hazardous to pregnant women. Although the symptoms only a mild, flu-like illness, it may cause stillbirth or spontaneous abortion, and preterm birth.

This disease can cause severe illness, including severe sepsis, meningitis, or encephalitis, sometimes resulting in lifelong harm and even death. The best way to protect yourself and your family is promotion of safe handling, cooking and consumption of food. Remember to wash raw vegetables and cook raw food thoroughly, as well as reheating leftover or ready-to-eat foods like hot dogs until steaming hot.

This disease is caused by bacteria called Leptospira. Despite the common perception of rodents spread the disease, leptospirosis also transmitted by goat. Contagion of the organism to humans can occur through goats urine or by water or soil containing their urine coming into contact with breaks in the skin, eyes, mouth, or nose.

Like the other diseases mentioned above, leptospirosis can vary from an asymptomatic infection to severe diseases. The symptoms ranging from flu-like ailments to liver and kidney failure, encephalitis, and pulmonary involvement.

This dangerous goat diseases that might passed to human mainly occurs because of the lack sanitation. In the developing country, the disease most commonly occurs in farmers and low-income people who live in cities. In the developed country, it most commonly occurs in those who involved in outdoor activities in warm and wet areas of the world. Even veterinarian is included on those whose occupations is at risk for leptospirosis. Thus, the best prevention of this diseases are improving housing, infrastructure, and sanitation standards.

Also known as “scabby mouth” or “sore mouth”, this disease is caused by a parapox virus. Typically, orf occurs in sheep and goat; producing pustular lesions on the lips, nostrils, and mucous membranes of the oral cavity in infected animals. Direct contact with any discharge from the lesions or from fomites may infect humans, and similar lesions on the hand, arm, or face will be shown.

Activities that may putting you at risk of infection include bottle feeding and petting infected goats, handling contaminated equipment, and being bitten by an infected animal. Contrary to other diseases that mentioned above, orf is a benign self-limiting illness. But serious damage may be inflicted on the eye if is infected by orf even if you are healthy, and it may cause a life threatening condition for immunocompromised host.