Who doesn’t know Eagle? Eagle is a powerful bird of prey, with large body size, heavy heads an beaks. Most of eagle species are larger compared to any others raptor, beside vultures. And like a bird of prey,  eagle is in the top of food chain rank in the avian world.

Speaking of avian world, we know that nesting is important for bird. We know that bird’s nest is important to bird for incubating, protecting, and even mating. So, does eagle also has this habit? 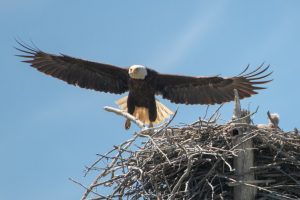 Does eagle have nesting habit?

So what do we know about eagle habit, especially their nesting habit? Here is some information you need to know about them

Of course Eagles need a nest, just like the others bird. They normally build a large nest, about 5 until 9 feet in diameters, and weighed up to 2 tons. Their nest is also known as aerie. Eagle usually put their nest in the top of tall trees or even on the high cliff. The outside of the nest is made of large sticks and the inside of the nest filled with softer materials such as dry moss, feathers, dead weeds, or stubbles. The golden eagle usually uses the materials that are offered in their habitat so we likely can tell which habitat they live in by looking at their nest. Sometimes the eagle also uses animal bone and even wire to decorate their nest.

Most of the building occurs for 1 to 3 months. Unlike robin bird where the female does the construction, both male and female eagles collect the twigs and build the nest together as a part of their bonding. And for each breeding season, they like to add new materials to their nest to increase the nest size.

The shape of aerie depends on the branch where they built it on. They will accustomized the shape of their nest, for examples, if they construct their nest in the tree forks, the nest will be in the conical shaped nest. But if they build it on the tree branch near the level or even on the ground, the nest will be disk-shaped. It could also be in the bowl-shaped or inverted cone-shaped if they have it if the trunk branches off into the smaller upright branches.

Most of the eagle often uses the same nest for year after year. Even if their nest falls down, they will build it again in the same site especially when it comes near to the breeding season. They also have strong fidelity to their nest by coming back to the same nest ever years if they successfully breed and raise their young in that site. If the nest proved to be unsuitable because the site was unproductive or the breeding was not a success, they will build a new nest in a new site. The bald eagle also have a strong attraction to their site. If their nest displaced or disturbed by human activities such as land development or logging operation, they will not return back to the nest for the next year.

Are the eagles territorial? Yes, they are. Especially in the nesting season. The pair doesn’t really like another pair of neighbor so eagles will keep out each other from their territory. Eagle has a special pair bonding activities. Building the nest together is one of the examples. They will remain with each other after the successful breeding.

But it doesn’t mean that they are mean! Most of the eagles mate for life like the graceful crane bird and the cutie colorful parrots. If their pair died or does not return to the site for breeding, they find and accept a new one very quickly and use the same site due to their fidelity to the nest.

Most of the eagle species lay about two eggs. The laid eggs must be incubated or stay in the warm temperature. Again, the parents share the responsibility to warm the eggs, but the mother usually spends more time than the father. The male usually spends the day by hunting to provide the food for the female while she stays in the nest. However, female eagle is still an independent woman! The female can also hunt for herself while the male remains at the nest.

The incubation will last for about 35 days. What the most interesting is, the young are already show their predatory side. Once the eggs hatch, the younger sibling will likely be killed by their big sister since the dominant one tend to be the female because they are bigger than the male. Does she get scold by her parents? Well, not really. The parents tend to do nothing to prevent the killing.

Now you know some fact about the eagle’s nesting habit. Knowing some knowledge about them should make us appreciate nature more, to remember that we share the same world with other creatures. We know that nest is important to the eagle and they are strongly attached to them until they will not come back to their nest if their habitat is disturbed by our activities. We also need to remember that the eagle has a place in the top of food chain in the avian world. So any others disturbance in their population will trigger chaos in the chain. Philippine eagle is already one of the endangered birds!