Chickadee birds are North American birds in the family Paridae, along with titmice, and genus Poecile. This kind of birds has a small body and darker color of the crown of the head and throat. They have a short, straight, and rounded brownish-black bill with a short neck and dark brown eyes. Chickadees are able to fly at a speed from 12 up to 13 miles per hour, and the females are able to lay up to 10 eggs per year, which is a lot of children to take care of! Most of the chickadee is a year-long resident bird and do not migrate. In the world, there are seven species of chickadee bird that you can find:

Not only cute in size, but they also have a cute personality because they tend to be super friendly with humans. So, what do we know about this cute little bird? 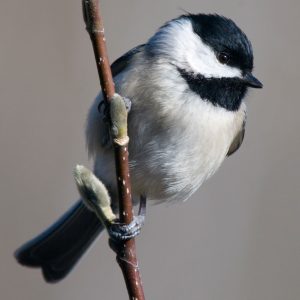 8 Things That You Need to Know About Chickadee

No wonder why this bird is popular because they are everywhere.  Just as much as popular like Wren bird who is once become the national bird, the chickadee is also used as a symbol of the state. The Black-capped chickadee, for example, is a state bird of Massachusetts, United States and the provincial bird of New Brunswick, Canada. Maine State also use chickadee, without mentioning the specific species, as their state bird.

If the Black-capped chickadee gets their ‘black-capped’ name from the black streak from their beak to neck over the top of their head, the case is different with the Grey-headed chickadee.  The Grey-headed chickadee, or also known as Siberian Tit, spread across subarctic Scandinavia, northern Asian, to Alaska and up to northwest Canada. Despite the name is grey-headed, the bird does not have a grey head but instead, they have a black, white, and brown head.

The Black-capped Chickadee resident is in the north area of North America, while the Carolina chickadee normal resident is in the south are of North America. But somehow they wander around from their normal area and meet each other. The problem is, that the black-capped chickadee is almost look-alike with Carolina chickadee. Even the bird themselves get confused to differentiate these two species, so they may (accidentally) hybridize with each other. This hybrid bird from these two can be way more unidentifiable.

Most of the chickadee species common lifespan is about 2 and 3 years. Some studies suggest that for specific, the black-capped chickadee’s average life expectancy is about one and a half years for female and 1.8 years for a male. Because they are not a migratory bird, the weather seems to be the main cause of their death. But some oldest wild Black-capped chickadee lived long enough which is up to 12.5 years, while the oldest Carolina chickadee in the wild lived up to almost 11 years.

They are not a picky eater. They eat a lot of variant of food from insects, nuts, seeds, and fruits. They also like to be fed from the suet feeder, blocks made of suet or thick substitutes, combine with corn, peanut, or dried insect that usually provided in the yard for the bird in winter. For advance, chickadee favorite type of food beside suet is black oil or hulled sunflower seeds, peanut butter, peanut kernel, shelled peanuts, bread, and safflower. They also a hoarder of birdseed. Chickadee able to hide their seeds is thousand of different location and remember each of the places.

During the breeding season, the black-capped chickadee will pair up and become solitary and territorial,  and turn into more sociable and gather around with different species flocks in the non-breeding season. During the nesting period, which is April to June, the pair of chickadee will find a hole, about 3 to 21 feet of the ground, in the tree to support their nest.

We know that not every kind of bird does the migration, including chickadee bird. Most of the species of chickadee are a non-migratory bird. So how do they survive? During the cold weather, they able to puff out their plumage, which makes them look even cuter as a fat ball of feathers. The plumage, along with constricting the blood vessel to the skin, will help them to prevent body heat loss and maintain their body temperatures. When the weather temperatures drop (mostly during the night) and food stocks are low, they will enter a torpor state: they are depressing their breathing, metabolism, and their body temperature until about 10 degrees to help them decrease their need for food. What a complex mechanism, right?

Do you know that the origin of the chikadee name is from their own habit? They are named after their distinctive sound. Chickadee is not a quite bird like owl or pigeon, and they are super talkative.  Chickadee sound, or chick-a-dee, which gave this bird its name, is not as simple as it sounds but astonishingly complex alarm call. Studies found that this sound  can be triggered by dangerous raptors and use to warn their flocks of the nearby predators. Even the number of the dee can indicate how ‘bad’ the situation is. For example, they project one dee when a known person fills their feeder, which is no threat at all. Then raise into up to four dees when the small raptors near their feeding tray, and increase up into 23 dees for alarming about the main threat for them, which is the pygmy owl, close to their nest or feeding station.

That is all the things that we know from this small bird, from their name, their habit, and also their foods.