Skip to the content
If Cockatiels is the America’s favorite pet bird, then Wren Birds has a special place in Britain’s heart! This popular bird is known for its small size with loud noises. Wren bird mostly distributed from Alaska and Canada to Southern Argentina, and up until now, Wren bird is the most common breeding in the UK. Wren bird recognized this bird by its pointing tail and darting flight.
But even Wren Birds is not the smallest bird (well, it’s kind of the shortest in Britain, actually…), it is hard to spot them in nature due to their color. Their feathers composed of brown-ish color such as gray, brown, black, and white, just like wood. They also naturally shy and secretive. Depending on the species, wren birds able to live in a wide range of habitats. From dry, wooded, and the wet of rainforest.  Here are some fun facts about Wren Bird!

16 Amazing Facts About Wren Birds and Their Breed 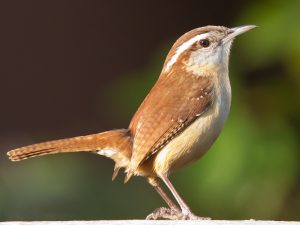 Regularly in North America, there are some of Wren species divided mostly based on their habitat. There are The winter wren (Troglodytes troglodytes), the house wren (Troglodytes aedon), Bewick’s wren (Thryomanes bewickii), the long-billed marsh wren (Cistothorus palustris), the Carolina wren (Thryothorus ludovicianus), the rock wren (Salpinctes obsoletus), and the largest one is the cactus wren (Campylorhynchus brunneicapillus).

That’s all the 16 amazing facts about Wren and their breeds. So, are you interested to keep Wren bird as a pet? But remember that some species of Wren is counted as a wild bird and some authorities do not let you keep a wild bird in a cage because that is counted as illegal. It is highly recommended to give it to the proper authorities when it is found.

That’s okay, though! You still can pick other types of birds for you to bring back home. For example, you can pick a Cockatiel who has gentle personalities and able to speak and sing. Or if you want a bird with an easy treatment, you can go to Finch Bird.

You can also have the exotic bird from  Cockatoo with its colorful feathers until the majestic Parrot to keep it as a new friend in your home! After all, remember that some type of animal, especially the wild one, always belongs to the wild of nature. We can always be having fun without breaking any laws and doing illegal things by harming the wild animal, right?