Duck illness are enemy of every pet owner, so does the farmer. For poultry industry, duck sick should be treats as soon as possible to avoid illness transmitted. Why duck has more possibility of illness transmitted? As we know that duck tends to make a group when they are moving. There are minimal two of duck that easily found moving away somewhere. It is just a sample when you pet only two ducks and now how if you pet it for 20 or 50? It surely makes the transmitted also infected all of them, right? 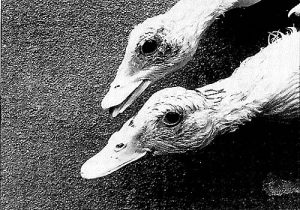 Before we talk deeply about those illness, here are farmer requirement to face the illness.

Here are some commonly duck illness that farmer should know.

Something locked has more possibility to caught by stress. It is same with human when we have to locked in somewhere, don’t know what to do, don’t find something to do, it would cause stress. Honestly even duck is not a sensitive animal, they still caught by stress. There is so much factor that cause this illness like noise, move often, and change food too often. The symptom of this illness that easiest to see is they would pull out their own feather. Basically, this is not only symptom that appear when stress coming. They are also pull out their feather basically if the female is ready to laying egg. There is no solution to solve this problem except taking away the duck of their stressor.

Brooder pneumonia is the illness that attack baby duck. Baby duck still has soft feather which is not enough to safe them of cold. Every people already know that baby duck should had heater to keep them hot, but this illness will caught them if the heater didn’t heat enough and the wall of their cage can’t keep the heat inside. Symptom of this illness is head swelling, hard breathing and watery eyes. To avoiding this, you can control the capacity of baby duck inside their cage. Make sure that between quantity and the cage is suitable. To know more about how to rise baby duck, here is the guideline.

Mycosis is actually poisoned case when the duck accidentally eats their food which contained fungal and bacteria. After catch this, duck will passively move, loss weight extremely, and die soon. To avoid this one, you have to make sure the cleanliness of your poultry cage. This illness you must be careful when you decide to spread the food on the base of the cage.

Fowl cholera caused by Pasteurella Avicia bacteria. Main cause that make this kind of bacteria come is by wet and moisture condition. If this is happened to baby duck, the possibility of dead can reach 50% but in adult duck it is less of it. Symptom that usually appear is fever, hard breathing, head welling, and unbalanced move. If it already worse, the duck would like begging and sounds like hurt. This illness can cause dead at once.

Same like mycosis, botulism is actually poisoned case. This case come when duck eating rot food. This illness is contagious, not the illness but the bacteria can transmit. Some reasons why this disease getting dangerous is because symptom that appear are basically similar with another sick like hair fall which same as stress, paralyzing like fowl cholera, and passively move like mycosis. Need more deeply observation to make sure this one. Besides, the transmitted of the bacteria is pretty quickly, so does the dead. All about botulism should know by duck farmer.

White eyes usually attacked baby duck which under 2 months old. Some people believe that this case caused by virus. High of humidity and wet base cage are mainly caused of this. Symptom that usually appear are there is liquid that come out of their beak and eyes. During the time, this liquid getting yellow. The duck would hard breath, paralyze, and when they are convulsions dead can’t be avoided.

Symptom of this illness is almost similar with white eye. Coryza also known as cold illness which is easily attack duck when the season changing. Basically, this illness can cought all duck old but basically younger duck which 1 weeks until 2 months old duck has high possibility of this case. If the liquid in white eye can be change to yellow, there is no colour changing in coryza. People believe that this case is caused by microorganism which growing well on transition of season.

Basically, even the illness contagious or not contagious as long as we as owner or farmer are responded enough of this issue, our ducks will have quickly treatment and they are will safe. Remember that in poultry industry, your profit counted as much as the number of yours. One lost means one loss. And now let’s imagine how if it is died for dozen?

Besides, people will loss their respect and trust of you when they know that your poultry management is messed up and your duck dies much. The illness that comes your duck is a prove that you can’t manage them well, whatever the cause is it. And, people or your reseller would think that you producing low quality product and you don’t have any effort to solve them. There is no vaccination to prevent it so they would think that you don’t care of the duck and just think about profit. Well the conclusion is illness, trust, and quality are integrated things that you should goal for. Without any of them, it can’t call a business. However your good management quality the illness still threat yours. How loyal your customer they would has trust issue when you didn’t give them quality product. And whatever your business the fundamental thing is the quality.