Trend to pet something changed during the time. Even it depends for preferable thing, in the fact some animals winning some trend to pet at home. We can said like fish and bird which mostly pet being pet. These animals are popularly being pet animal beside cat and dog.

But trend is always changing? Who knows, some animals which under rated before now is showed up and become trend. That animal is reptile. Reptile has many kind of animal which being pet at home such like snake, lizard, and of course iguana.

Some people my pet it because their beautiful color. The combination of green and black and some orange and yellow their spike will easily catch whoever people who see it. Even still there are people who scare with this animal, their exotic color can’t deny it.

Iguana is reptile which popularly being pet at home now. Even they were underestimated because people rarely put reptile in their house, but look around you now. The number of iguana’s owner increase right? That thing happened by contributed of iguana’s feature that mostly people don’t know about that. If you want to know about that, please put your attention to things that written below. 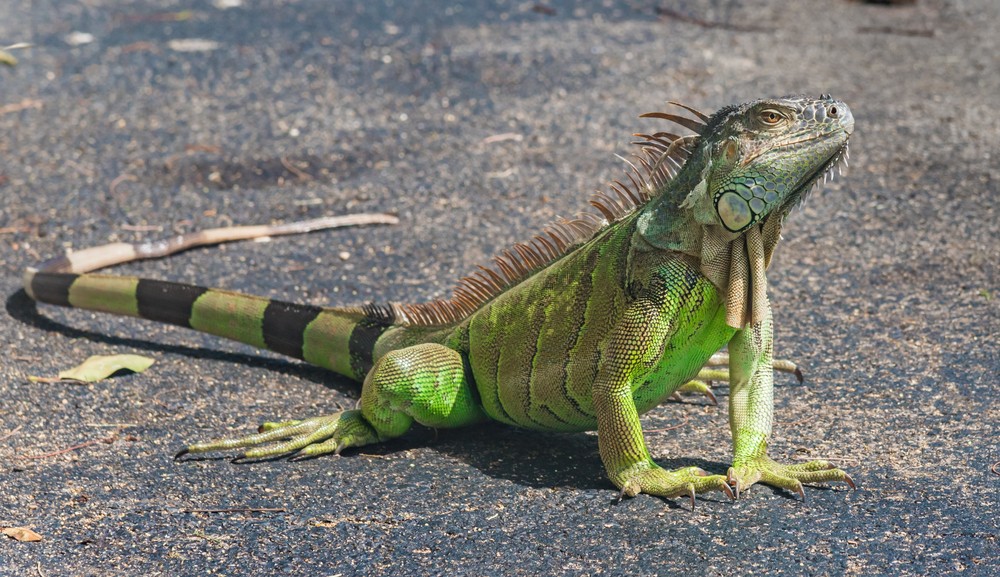 Some people might don’t know that iguana is herbivore because of their scary face. People may compare them with crocodile which carnivore because they have some similarity, but in the fact iguana is herbivore. You don’t need to be afraid when iguana bites you because literally they didn’t eat meat. All they can eat is just vegetable, fruit, and grain. Give them meat is just kill them.

Iguana has two eyes on every side of them which worked well to looking around move, color, and shadow. It also works to see something in far from them. To communicate each other, iguana also uses their eyes. Iguana also has ‘parietal’ eyes in the very top of their head. Uniquely, if you want them to give you more attention, use some colors like yellow, red, orange, and blue will be highly responded. That’s because the color is related with their food so they may think that you are their food. But once again don’t scare to be bite because they can’t eat meat at all. Remember that they are herbivore. Their bite is not really means eat.

Basically iguana that mostly pet is green iguana. But there are two basic lizards under iguana genus, Green iguana and Antillea Iguana. The green spreads out in south Brazil, Paraguay until Mexico and Carribean Island. The green included in invasive species because their ability to survive in the new habitat with high level. Also, their breeding process is high. That’s caused their population recently living in south Florida, Hawai, and Texas. The green can growth until 2 meters and 9 kilograms. Their living place is in tree and preferable the tree which near with water.

While the Antillea is endemic species in Small Antilles Island. The Antillea is endangered because of damaging habitat according to IUCN. The Antillea can growth untuk 120 centimeters. That’s endangered also supported by their low breeding. If mostly iguana can produce 25-40 eggs, Antillea only produce 8 eggs. Even there are some lizards like Sea Iguana, Black Tail Iguana, Blue Iguana, and Jamaica Iguana mostly called as iguana, they are not included in iguana genus.

The blue iguana is one of endangered animal according to IUCN. Even their lifespan is the longest with 67-69 years old, it doesn’t guarantee that they safe from endangered. This species is said as subspecies of iguana cuba before. Same as Blue Iguana, Jamaica Iguana is also endangered. Jamaica Iguana is the biggest land animal and ever said as extinct in 1948. But their species found in 1990. After that, IUCN added it into red list endangered animal.

4. Related with dinosaur and education.

This point is the reason why some parents pet this animal. If you want to introduce ancient animal like dinosaur, that’s can you started with iguana. Some people believe that iguana is dinosaur which already evolved even there is not scientific study yet that proofs it. Besides, iguana can be your well biology object research for collage and school.

5. About the male and female.

Physically, the male iguana is much bigger than female. The female only heat one per years and able to produce 25-40 eggs. The male can be heat 3-4 times per year. Interestingly, when the female is lay eggs, the one who will incubate the eggs is the male. For sea iguana, the female will be in heat on 3-5 years old and for male in 6-8 years old.

Some people believe that iguana is fool animal. But in the fact, they can to be trained for basic thing like toilet training. Surely it needs patient and process to train them. To make it easier you can train them since they were young. Also, train them routinely will make them getting used.

7. Iguana and the sun

Even iguana need sunlight to help them absorb their nutrition by UVA and UVB light, in the fact not every time of UVA and UVB light is good for them. The point is balancing. How you have to know when put them outside to absorbing nutrition and when you have to move it to reduce the hot of sunlight. Not every single time you can let your iguana under the sunlight.

Iguana can living for 20 years old. Some types found that they can live up to 29 years old. You can also put your iguana living as long as them doesn’t matter if the iguana being pet or not as long as you treat them well, stay it away from disease and stress, and give them vitamin. Nice treatment never betrays the result.

As mentioned before that iguana is herbivore which only eating vegetable, fruits, and grain. In the fact, iguana has slow metabolism. That’s caused the eating process takes a long time. This would be advantage for you because you don’t need to feed them every single time. You just need to feed them while the eat box is empty.

A land called as Iguana Island because there are so much iguanas inside it. There is no perfectly news or proves about it but some people believe that there are 10 million iguanas there.