The abortion case over the cow is really commonly to happen. It just not only the female cow which is can’t pregnant well but it also the condition inside their womb. There is something wrong in their womb like disorder like wound, disposition, and etc. That’s why the pregnancy which beginning with okay and normal should be shut down and abortion.

Basically this abortion known after the pregnancy is happen. So in the first, female cow is so fertile and normal when they and their couple are married. Because there is something over their womb like wound or disposition, so the uterus should be forced to making out. Actually the womb problem can cause by some factors like disease or their own disorder. The disease which normally cause this problem is like virus, bacteria, and fungal. 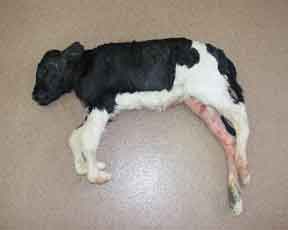 The abortion also can cause by the dead-fetus that can’t be living longer inside the womb but the shape of the fetus is already perfect (if you didn’t know about fetus, fetus is a baby of cow which ready to be birth). For another word, fetus is the baby which ready to birth but it is dead inside the placenta.

Basically the abortion is cause by infection and non-infection. The non-infection factors that can cause abortion in cows such like deficiency of Vitamin A and Vitamin A, selenium, and phosphor. Besides, hot temperature and stressed can caused hypoxia and fetal acidosis. And, the high temperature that happen to the mom is more affected to the fetus than external temperature. Another factor that cause abortion in cows are trauma and toxin. The example of toxin which is causes this problem such like Ponderosa pine needles, Astragalus sp, and Gutierrezia microcephala. To get closer and more know about what’s the reason of abortion in cows, let’s move on the main causes below that you should know.

Basically abortion case over cows caused by fungal. More than 60% or 80% cow abortion caused by fungal and mostly of Aspergillus sp. And the abortion condition 0.5% until 16% from all abortion case that cause by this fungal. This fungal inside the cow body by their food or respiration system. After that, it takes by blood and spread all around the body. If we talk about how this fungal can killed the fetus? Here the explanation.

So it is the fungal just steal the food? Well the answer is not. Beside stole the food and killed the baby, this fungal also break the womb of female cow. It would break the fetus membrane, endometrium, retensio placenta and infertility permanently after abortion.

Here are some efforts to treat abortion or avoid your cow over abortion case.