Broken leg is a serious problem that caused some reasons such crash. It is a problem which needs emergency aid to repair and back the bone on its first position. Not only on human, that’s problem also become serious to bird. As we know bird using their foot to perch, hanging, and grab the prey and another crucial things. You can imagine how hard their life if the legs is broken, isn’t?

Usually, broken legs in bird cause by some reasons like fight, cage clamp, or disease. They would show some symptom like limp, lifted its leg, and moreover paralyzed. Basically bird paralyzes are so rare, the one who automatically paralyze when something not good on their legs is chicken. There is also wound which appeared when your bird had broken legs. Generally, the broken legs in birds usually appeared physically. 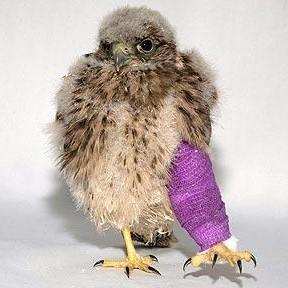 You may automatically bring your bird to the vet when they got broken leg. But you can give first aid to decrease some risks when you on the way. Moreover if your bird can heals without vet, would be greater right? Here are some steps to treat broken legs in bird.

There are another ways which focused using traditional method that you easy to meet the ingredient. Here the steps:

Basically the whole of this steps using lemongrass.

Make sure that his foot is already straight perfectly to avoid his leg from bend. Your bird will be limp if you don’t place it straightly before it wrap. Also, the leg that is not straight will decrease the effectiveness of this treatment. After the treatment, you need to give them food with highly contained mineral, calcium, phosphor, and Vitamin D to keep the bone strong. Also, sun bathing every morning will also increase the power.