Let’s talk about Mammals! Mammal is a warm-blooded animal who gives birth to the young. It also knowns as the last group of animals to appear on earth. Until now, they diversified into a lot of groups with different shape and size. Most of them covered in fur or hair to protect their skin and keep them warm. Another noticeable appearance of mammal is their skin glands. They have skin glands that allow them to sweat, whereas an endothermic animal, keeping their body temperature at a constant level is important for them to survive.

Mammal feeds their young with milk produced by their glands, which is another appearance to differentiate mammals with the others. The characteristic of milk glads is unique. The glands milk is important to their infant because it contains with nourishment and anti-body to prevent disease.

Talking about food, how was their feeding habit? Here is some information about mammal’s feeding habit, especially their babies’ habit. 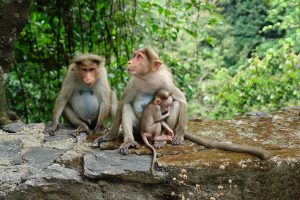 Do Mammal Babies Have Feeding Habit?

Let’s talk about the general feeding habit of mammal. We know that mammals are diverse in feeding habit and often impacted by their environment and surrounding. They can change their feeding habit if their daily food source becomes scarce to survive. Mammals feeding habit categorized into some groups below:

This group of mammal eats plants, grass, leaves, shoots, and fruits. Most of herbivores mammals have grinding teeth to chew tough plants and their systems are designed to digest vegetation’s cellulose.
Due to their feed habit, herbivores also have complex facial muscles. Their facial anatomies allow them to eat vegetation. The lower jaw is able to move in every direction from up and down, left and right which help them for chewing. Their saliva also helps them to digest the carbohydrates start from the mouth. In this group of mammal, they can be divided into another 2 groups: the ruminants and the non-ruminants.

The ruminants need more extensive digestive system because they eat indigestible fiber from plants. Their digestive system does not only happen for once because one trip to the stomach is not enough. The food has to come back to their mouth to chew and digest one more time before swallowing it down to their stomach again. Due to this complexion of their digestive systems, they depend on several nutrients and vitamins such as Vitamin A, Vitamin B, and fish oil. The example of mammals that are counted as ruminants is cow, goat, sheep, llamas, antelopes, and giraffes.

On the other hand, non-ruminants is the easier one. They don’t have a digestive system that is as complex as the ruminant because they eat more digestible plant with a single-chambered stomach. For examples horses, elephants, kangaroos, and primates.

They are the meat-eaters! Some mammals can be called as a carnivore if they prefer animal matter over the plant. As a ‘hunter’, carnivore has to kill others animal as prey which means carnivores mammals use to be at the top of the food chain, for example, Eagles, Owl, Lions and Tigers, and Wolves. As for the last three examples, they eat meat because it is hard for them to digest plants or vegetable due to limited facial muscle. Their teeth are also designed with long and sharp canines to let them stab and kill their prey.  Not only the scariest one, your cute pet such as cats is also a carnivore because they like to eat fish!

But do you know that the term “meat” here is not only limited to tissues in mammals or fish? The meat here also refers to the soft inner of insects and spiders. Anteaters, for example, are also included as carnivore mammal because they eat ants and other insects to gain nutrients. So do aardvarks, hedgehogs, and bats. For specific, they counted as insectivores.

This group of mammal is not a picky eater. They feed on a wide variety of foods, from plants to meat since their anatomy is either carnivore or herbivore. They adapt to their environment to feed on a different kind of food. For examples, we clearly can notice bears is a meat-eater with their teeth, jaws, and claws which are similar to carnivore’s anatomy, but bears also eat vegetation and berries when they are not hunting for fish or prey. So does raccoons. They are able to eat fish and bird and also eat fruits and nuts.

So, how the babies mammals eat or feed on?

Just like their feeding habit, how baby mammals are born are also different from each other but one thing is common that they drink milk that comes from their mothers’ glands milk. Including mammals that live underwater such as whale and dolphin. Ever wonder how the baby drink their mother’s milk? It’s actually just as the same with the rest of mammals; the milk is ejected into the baby while the baby holds onto or around their mother’s nipple.

Milk is important to the mammal babies because they cannot digest solid food matter so they need to cling on to their mothers. The length of time can be different from each mammal. Mammals with the shortest nursing period are the hooded seals. The pups are weaned only for four days due to their extreme environments. The longest period is orangutans which need at least seven years before the mothers stop breastfeeding the young. While the closest period with the human is the black bear with 2 years for nursing their cubs.

Since the milk is produced by the mothers, the baby will rely a lot upon the mother and the mothers need to take care of their young. Day by day, the babies will learn to eat different type of food by copying their mothers. They watch and do the things they see their mother do and start to eat meat (for the carnivores), plants (for herbivores), or both (omnivores).