Mostly people pet the green one but there are many kind of chameleon which has another color pattern in their body. Some of them also have two color combination which still good and pretty. Chameleon which the most favorite to being as pet in home is chameleon garden. This chameleon has green color and so similar with Rapunzel’s.

Now let’s move to some guides to take care of pet chameleon below. 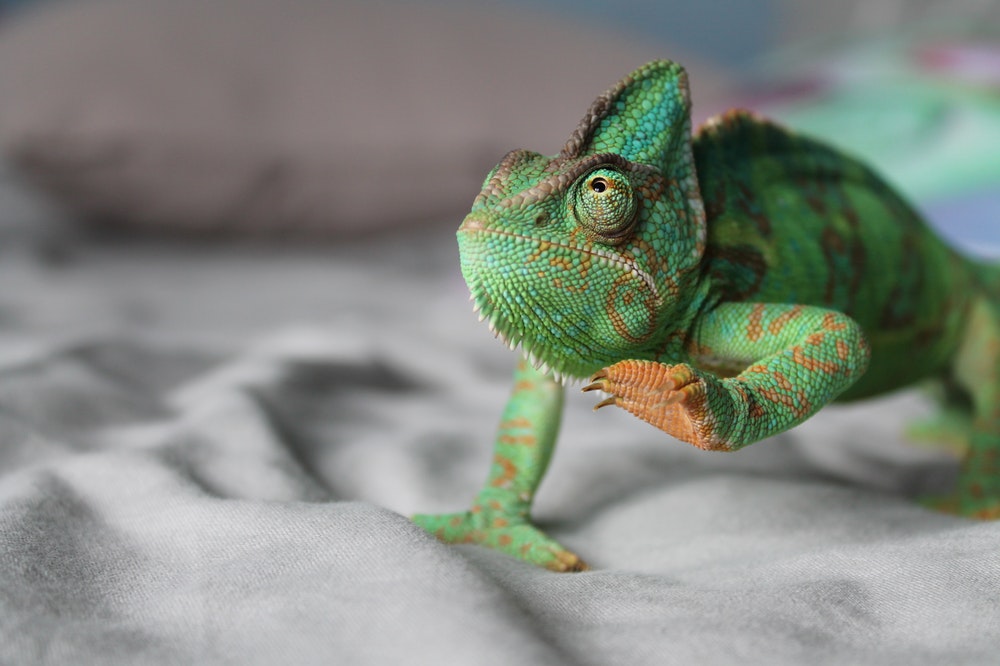 If you are beginner on this business, just treat your chameleon like you met new people. Know each other is the key to make you close. You also better know their characteristic but if you didn’t know, let me tell you something. One thing that you must keep it on your mind is chameleon is weak animal moreover if you pet the kind of chameleon garden. They do like to lift or carried but they hate to touch. You better don’t touch them too much because it would make them weak and threat their live. You can touch them for one or two times but don’t touch them too much like you touch dog or cat like you wipe it. Basically chameleon didn’t like to be touched. And even you try to touched them don’t touch their back because it is sensitive area and can cause them to be angry.

So basically if you looking for pet which can commonly carried and wipe or touch, chameleon is wrong option at all. You better think it twice. Chameleon will change their body color when they feel pressed, cold, or sick. And they are lonely animal. They live individually so when you pet them you better don’t add more than one chameleon in a cage. Honestly, every kind of chameleon has different characteristic. There are love and hate people. If you want to know them before take it on your home, put your attention when they are feeding in the pet shop. Chameleon is sensitive with stress. They need environment which really calm and relax. Music which too loud isn’t good for them. Also, chameleon can’t interaction with another your pet like dog, cat, or bird so this animal is like single fighter, isn’t it? Hahaha.

Because they need calm and relax environment, that’s also make you to be careful in cage business. You can use reptarium (reptatium is like aquarium for reptile) as their cage and make sure you choose three times bigger than their size. Also, place it in your home which far from family activity and another loud source, like home terrace or bird song cage. Don’t place it near of the window because the sunlight will burn them. You can put something like plant both imitation or real plant inside the cage and add some perch to climb. It is for design their new home as same as their wild life. Also, by this method hopefully will make them feel safe and comfy so it would reduce their stress level.

You also add something which increase the humidity and don’t forget to install some light for them. Basically the cage design between iguana and chameleon is similar but the different point is iguana need more sunlight and should be drying under the sunlight, but chameleon not. Chameleon didn’t need sunlight as much as iguana but it doesn’t need chameleon didn’t need sunlight.They need heat for dry but it doesn’t need long time. You can place a lamp in reptarium ceiling as their warm area when they feel cold. The lamp is bulb lamp which has 60 watt. You also need add full spectrum lamp because bulb lamp can’t produce UV light and don’t put the CFL.

Bulb lamp helps chameleon produce vitamin D to absorb calcium which contained in the food. And the warm area should be 29-33 C so it is matter for you to place thermometer in somewhere which easy to see. The base cage should be able to keep the humidity so you can use coconut fiber over it. When the night comes, chameleon loves cold temperature which already fulfill by room temperature.

Chameleon mainly eat insect like cicadas but even they are insect eater, don’t give them bee and wasp. Chameleon has high calcium nutrition so the reptile which ate them also got it by digestion process. Chameleon also like bumbung caterpillar, hongkong caterpillar, super caterpillar, moth, grasshopper, and fly. You can grab them all easily in pet shop. But if your home is near of chicken livestock which so much fly, chameleon can also hunt their own food. But how for people who has home which far from fly source like chicken livestock or something? Honestly fly will always visit your home as long as you still keep the trash or something stink inside your home so don’t too worry about it.

If you think that their hunt isn’t enough to fulfill their daily meal, add the insect as mentioned before will make them happy. For you who bought baby chameleon to make you easier to getting used with them, you also need baby cicadas as their food. If you hard to find baby cicadas, you can also give them fruit fly. Talk about food, we also need talk about drink. If you find your chameleon licking something shiny, that’s mean that they are thirsty and looking a drink by dew. You can spray the water in their wall or leave inside their cage to be licked by them. Moreover some people can train their chameleon drink from the bottle. Amazing!

To make you easier to monitor the moist, you can use hygrometer. Hygrometer is tool to measure the humidity. If the moist is under 50%, you better manage the water system to make chameleon feel comfy. But if the moist is over 80% it will ruin the chameleon because the moss and mushroom will appeared. So the key to keep it well is BALANCE.

As mentioned before that chameleon is an animal which hate to be touch and carried so you must be careful when interaction. Even honestly you don’t need to get some interaction with them, but in the fact interaction with chameleon brings new experience, isn’t it? The easiest way to open interaction is by feed them directly by your hand. By that thing, chameleon wouldn’t aggressive over you.