Following the chameleon changing color will be never ended to give you interesting experience. Many people called this transformation become camouflage, but honestly it isn’t camouflage which has negative connotation.

Basically chameleon changes their color because there is hormones and cells reaction over something. Inside of chameleon body there are cells called chromataphores which works as their color producers. These cells placed in between two layers which contained red and yellow color on the upper and white and blue on the lower.

Even changing color process is caused by hormones responses, but chameleon changes their color by some reasons. The reason also triggered by something which came from internal and external factors. Here are some their reason: 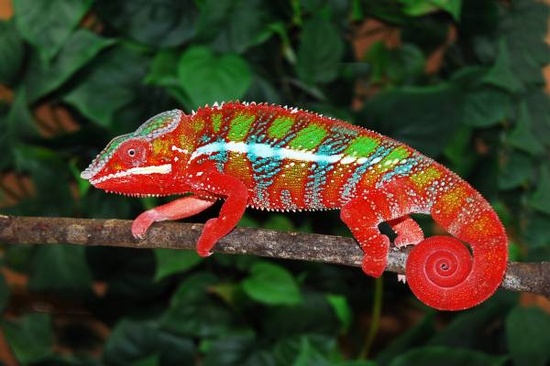 Hormones response also impact to mood changing, not only on human but also on chameleon. As mentioned before that chameleon’s changing color caused by hormones responses and their hormone also depend when they have to change their color and when they have to be stop. This mood changing included fear, sad, happy, and stressed feeling. Chameleon will change their color when they feel fear. This situation will be appeared if they feel threated by any predators which want to kill them.

Their hormone or cells which contained virus or bacteria will be easily identify by see their color changing. As we know that everything inside on our body will be contained in blood which mixed with cells. These cells of bacteria and virus will met chromataphores cells. Both of brain and the chromataphores will response this ‘strange’ thing and delivered the message. The message will be responded by chromataphores and the chameleon would be changing their color. So there is some process will be passed by chameleon during color changes. The process is so quickly, moreover chameleon can change their color in every 20 seconds. It’s not because they did it automatically but the process is so quickly.

That’s all the reasons why chameleon changes their color. The conclusion that we can get by this activity is animal has their own language and style to express their feeling. They can be so free to express it and makes it so really artistic. So we better don’t underestimate them, don’t hurt them, and don’t kill them. Love each other and make a better place with balancing live of God’s creature.