We all love koalas! Who cannot resist their cuteness? We know that Koala is a native to Australia and become its national symbol. They are a nocturnal herbivorous marsupial, who like to spend their time chilling out in the nooks in tree and chewing a lot of eucalyptus leaves every day! Koalas have tailles body with a large head and large ears. They also have a spoon-shaped nose which makes their face look super cute! Their body length is around 60 to 85 cm and weighs 4 to 15 kg, covered with silver or gray fluffy fur. You can find them around the coastal areas of the mainland’s southern and eastern regions, from New South Wales, Victoria, Queensland, and South Australia.

But the bad news is, Australian Koala Foundation (AKF) says that koalas may become “functionally extinct” and estimates that there are no more than 80.000 koalas left in the region. In 2016 koalas were classified from Least Concern to Vulnerable due to their rapidly declining population. This Vulnerable status means that developers have to consider the impacts on koalas when making the building.

Back then, koalas were hunted by Aboriginals. They used to snare an animal in the tree by attaching a lope of ropey bark to the end of thin pole, forming a noose, then kill them with waddy/hunting stick or a stone hand axe. Koalas also were hunted bu European settles in the early 20th century because their thick, soft fur to fulfill the demand for rugs, muffs, coats, or women’s garments.

Besides hunting, other threats to koalas are fragmentation and habitat destruction. The fragmentation of their habitat in Queensland is contributing to their distribution that has shrunk by more than 50 percent since European arrival. Australia also ranked as the fifth deforestation rates in the world. Many native trees are taken down to be made into wood products, decreasing koalas’ habitat. Their population is also declining from urbanization in the coastal areas and agriculture in the rural areas.

We don’t want to lose our little friend to the extinction, right? So let’s do something to help them. No matter how small or big it is, every single contribution is giving an impact. Let’s try to be better, little by little!

Live In Australia? Spare Some Of Your Time To Help Koala From Fully Extinct 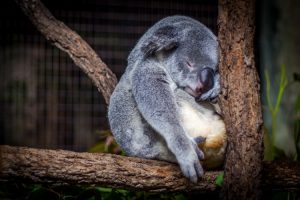 Just like what we have talked before, urbanization is one of the threats to koalas. We are one of the reason! How could it happen? Well, animals only can survive in urban areas with enough plants and trees. Urban populations also have some problems, for examples, the koalas or any other animals in urban area is facing the possibility of collisions with motor vehicles or even attacks by domestic dogs. In fact, these two reasons are responsible for killed 4000 animals every year.

There are many koalas killed by motor vehicle accident while crossing the roads to find some food or seek a mate in the breeding season. So whenever you drive around their area, especially at night when they are active, try to look out for them and reduce your speed. Anyway, it is safer for you too!

It is illegal to bring them home as a pet!

Koalas, along with other native animals, cannot legally be kept as a pet. Even the wildlife caretakes must have special permits and have to release the animals back to nature after they are well or old enough.

So sorry, mates! We do have to resist the koalas’ cuteness by not having them as a pet in our home. If you are looking for little companions, you can pick other usual animals to be kept as a pet like cats, dogs, or maybe some cute fluffy bunnies!

Protect their habitat, it’s their home!

What would you feel if suddenly, your home is taken away from you? We will feel sad and devastated, right? So do with koalas. They cannot survive without their home. When they know that their home and trees disappear, they tend to be stressed. This stress then may lead to serious disease and health issues, for examples chlamydia and retrovirus. So let’s try to protect their habitat and their trees. It’s their only home, after all. They need it.

Most of the koalas’ habitat is on private land. We can increase the number of their habitat by planting and retaining their food trees. Their food trees including forest redgum, tallowwood, and swamp mahogany. We can also give them safer ways of moving between their trees so they don’t have to spend more time on the ground, which is the time when they are most vulnerable, by extending corridors between areas of koalas habitat.

Notice when they need your help

You can notice that some koalas are in trouble by their appearance: Their fur should be around white or gray. If it is brownish, it can be an indicator of disease. The eyes should be bright without any red crusty deposits. They also should have creamy white bottoms with some grey patches. If the bottoms are dirty and wet, the koalas may have cystitis. For advance, you can also notice the change in their behavior. If the koalas show to be on the ground, staying in one low tree for more than a couple of days and do not try to get away from human they probably need to be rescued immediately!

If we want to make a big impact, we need hands as many as possible to join the movement so tell your family or friends that koalas are going extinct. Tell them that our little friend might disappear forever if we are not willing to change our behavior. You can also support the community for koala in your local area. Spread the messages through your social media post, group, pages, or websites. Every little effort is appreciated!